If you’ve been anywhere but on a desert island this past week (and I can only hope that’s precisely where you’ve been!) you know it’s been a wild week for the market, and a wild week of headlines focused on Greece, Puerto Rico, and the resulting market volatility. “Greece’s Debt Crisis Sends Stocks Falling Around the Globe,” announced the New York Times. “Greece debt talks: EU chief feels 'betrayed',” according to the BBC. CNBC stated, “Stocks ignored Greece, now pay the price.” On Puerto Rico, the New York Times headline read, “Puerto Rico’s Governor Says Island’s Debts Are ‘Not Payable’” alongside The Wall Street Journal’s story, “Puerto Rico Releases Report Calling For Concessions From Creditors: Report’s release sends some Puerto Rico bonds to record lows.” Clearly the world—and the markets—are reacting.

While there were a ton of alarm bells going off in the media Monday, the news that struck me the most was CNN Money announcing the “worst day for Dow in 2015.” It seemed to hit the core of my thinking…or at least to beg the question, “What does that even mean?” I’m an investment advisor, and I can tell you this: for long-term, prudent, and informed investors, it shouldn’t mean a darned thing.

I’m seeing something very interesting happening right now that shows my clients and other educated individuals are rising above the“cycle of investor emotions” that’s so common. When the market is up, people pay attention and get excited about the opportunity. When it’s down, they get nervous or scared and want to run the other way. What’s fascinating right now is that, despite the recent volatility, everyone seems to be talking about investing again—in my office and everywhere else I look. The fear of the recession seems to be over. Yes, the potential Greek and Puerto Rican defaults are concerns that create uncertainty around the global financial system. But they shouldn’t be casting doubt on how good companies and the economy are valued.

When it comes to investing, it’s important to remember that we’re investing in the economy in general—and in the strong companies that support the economy. Looking around me today, I see many very tangible indicators of that strong economy. Everyone I know seems to be headed to Europe this summer. New cars are everywhere. ”For sale” signs seem to turn into “sold” signs overnight. And it’s not just my own perception. Car sales are the highest they’ve been since 2001. Housing starts spiked more than 20% last month—the biggest increase since 2007. In reality, the US economy is going strong. And the fact that millennials have finally outnumbered baby boomers for the first time in history can only help sustain the momentum. More than 80 million millennials are exploding the population, and they’re buying everything. Houses. Cars. Computers. Washing machines. Dinners out. You name it, the single biggest generation in history is buying it today or planning to buy it tomorrow.

Yes, the headlines are right.

Greece and Puerto Rico default fears wreaked havoc on the markets this week. But beyond the headlines, when you invest for the long term, the trend is always up. Way up. 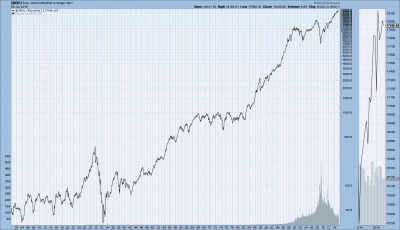 So, if you can, forget about Greece (except perhaps as a vacation destination). The market has been anticipating this default for years, so this “news” shouldn’t be a driver over the long term. Forget about Puerto Rico…that default has been assumed for a very long time (one reason why our bond funds don’t hold any Puerto Rican debt). Forget about the media (except for infotainment), forget about the headlines, and focus on the economy. Less than five months ago, the headlines were shouting the news that the S&P 500 hit a new high and clients were coming to me ready to invest—or re-invest—in the market. The informed investor rises above the cycle of investor emotions and continues to stay the course. Today, the market has settled down, though all bets are off if Greece does actually default this week or next. No matter how the markets react to the situation, my advice is to remember Warren Buffet’s words of wisdom: "It's far better to buy a wonderful company at a fair price than a fair company at a wonderful price."