I was out with friends the other night when I heard a familiar story. Someone’s mother (it could have been anyone’s!) had some unexplained symptoms in the middle of the night. She did what many of us do: she turned to the internet and WebMD. She plugged in her symptoms and read the descriptions of the possible causes. Early the next morning, she called her daughter and announced the verdict: “I checked online: It’s a brain tumor!”

I’m sure you know the rest of the story. Rather than joining the panic, the daughter scheduled an appointment with her mother’s physician. After a few simple tests and a short conversation, the physician determined that the cause was not a brain tumor, but a case of serious but easily treated dehydration. The prescription: lots of fluids—and a restricted diet of WebMD!

Of course, investors can easily fall into the same trap. Between the internet, TV, and radio shows, you will find a plethora of financial data and facts. You can find anything online. Today’s biggest winners on Wall Street. The top stocks to buy tomorrow. Which way the Fed will turn next week. When Social Security will go bankrupt. Everyone has a crystal ball—and everyone wants to talk about it! Just as WebMD is chock full of legitimate medical information, the financial news outlets do include numbers and information that matters. While this deluge of facts and information may be valid, converting it to usable information requires context and experience.

That’s precisely where your financial advisor adds enormous value. Similar to a medical doctor, a qualified financial advisor like a Certified Financial Planner (CFP®) is carefully trained to analyze the big picture, including things like market data and economic indicators, as well as the all-important “patient” information, to create a prescription that fits your unique set of circumstances. Why does that matter? Because left to their own devices (including the all-powerful internet), most individual investors fall short. Reading about the causes of a brain tumor doesn’t deliver the best possible outcomes. According to a study by financial marketing research firm DALBAR, from 1990 to 2010, the unmanaged S&P 500 Index earned an average of 7.81% annually, while the average equity investor earned just 3.49% annually over that same period. The culprit? Investors chose to self-prescribe and self-medicate.

Without the guidance of a financial advisor, it’s easy for self-medicating investors to overreact to the ups and downs of the market. Seeing short-term market volatility? It’s time to sell some investments. Is the Fed lowering interest rates? It’s time to buy. By reacting to one or two data points based on recency bias rather than strategizing based on context and a long-term perspective, investors often make less than optimal decisions.

To make matters worse, the sub-optimal results those decisions create compound over time. It’s easy to assume that a small misstep or missing a few days of strong returns wouldn’t make much difference. As the chart below shows so well (thank you Dimensional Funds!), that’s far from the case. In fact, if an investor missed just 25 of the single best days invested in the S&P 500 between 1990 and the end of 2017, their annualized return would have dropped from 9.81% to 4.53%: 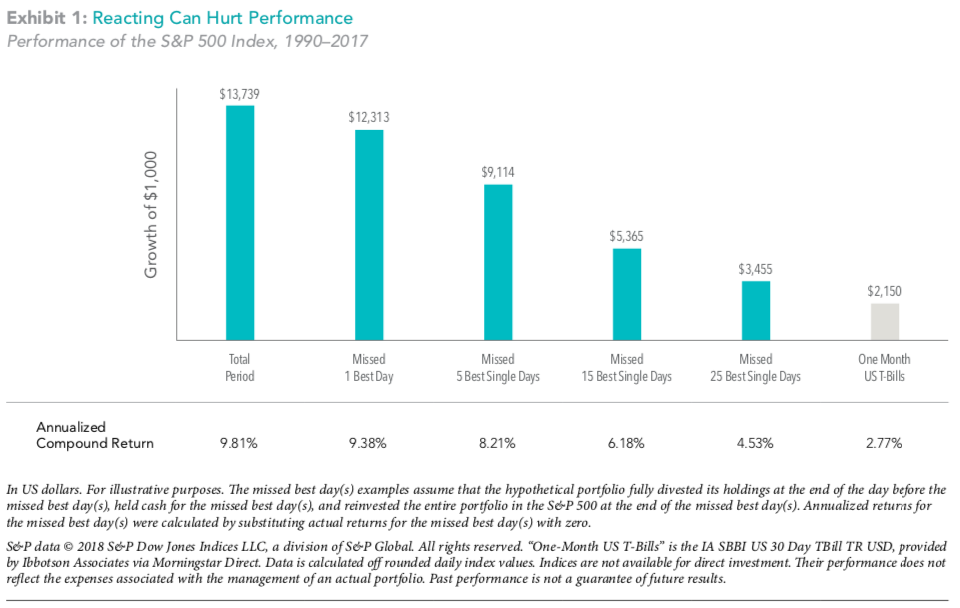 Ouch! That’s some nasty medicine to have to swallow. What’s even more tragic is that the investor may never know what they could have achieved had they stuck to a strategy rather than self-medicated through a bout or two of volatility.

The lesson to be learned is that while there’s a ton of financial data out there, that doesn’t mean the information is relevant to you. Is Apple stock going to soar again? Is Beyond Meat the next “sure thing”? Maybe. But that doesn’t mean that either stock has a role in a portfolio that is designed to meet your life goals. The same is true for a host of other financial options. Should you create an LLC? Purchase an annuity? Invest in emerging markets? Claim Social Security early—or later? Get a reverse mortgage? Any of these may be a great prescription for someone else, but that doesn’t mean they’re right for you.

You may have a terrible headache, blurry vision, and some tingling in your legs—all of which are symptoms of a brain tumor. Then again, you may need some rest and a good dose of fluids to get you back on track. The best way to know which options are right for your own needs is to work with a professional who is trained to examine your entire financial situation and who has the knowledge, experience, and insight to prescribe a treatment plan to help you reach optimal financial health. When you need a checkup, we’re here to help!