Last weekend I attended a day-long workshop with Sharon Salzberg, a world-renowned author, teacher, and influencer who, for decades, has been an important voice in the modern movement toward mindfulness and meditation. The title of the workshop was “Equanimity in challenging times.” The timing couldn’t have been more perfect.

Salzberg opened the morning with a simple sentence: “Some things just hurt.” (Isn’t that the truth?!) Of course, her message was about much more than the fact that pain exists. The focus of the day was learning how to stay balanced—to find a path to calm even when it feels like you are being tossed in the storm. Sharon went on to talk about how maintaining balance inside ourselves gives us the power to stop reacting to the small things, and (at long last) to focus on the things that matter.

What an important message! It’s something most of us know on some level, but achieving equanimity is easier said than done in our day-to-day lives. After all, “some things just hurt,” and trying to stay calm when we feel pain can be a major challenge.

That can be especially true when facing a financial challenge. Money, inherently, is an emotional hotbed, which means that the smallest issue can create fear, panic, shame, and a slew of other negative feelings. We’re human: we imbue money with power, and we often cannot control our obsession with it. (Read more on money and emotions in my blog post, Finance, and feelings: Navigating life's twists and turns.) However, what we can do is find a new perspective.

Maria called me the other day, awash in emotions about the current stock market and its impact on her portfolio. At 67, she is in her first year of retirement. As a widow, she is on her own financially. Like many women in her position, her biggest fear is outliving her assets—of becoming a penniless bag lady in her final years. “Since December, I’ve lost more money than I can stand to think about,” she told me. “I worry about it night and day. I can’t take it much longer!”

Maria is no financial novice. She understands how the markets work, she has saved well and invested wisely, and she’s old enough to have watched the market swing back and forth—sometimes wildly—many times. Her fear of the future has thrown her off balance. To ease her mind, I began by telling her a story about one of my challenges: acrophobia. Yes, I suffer from a terrible fear of heights.

I told Maria the story about the night I drove up the coast to a fabulous party with great friends. I had been looking forward to the evening for weeks. As I approached the Malibu cliffs, that old fear started to take hold. I suddenly had the overwhelming desire to turn back. All I wanted in that moment was to be home, safe and sound, with no cliff to be found. (Even re-telling the story now, I can feel my heart beating way too fast in my chest!) I felt totally and completely defeated. I pulled over to the side of the road—not the cliff side!—and called the host to tell her I couldn’t make it. I can still hear her calm, soothing response:

“Lauren, you can do it. Just breathe…and don’t look.”

My friend was right. It wasn’t easy, but I took a deep breath, and I just drove. Once I arrived, every minute at the party was extra sweet. I had accepted that the best way out of emotions is through them. I’d found a path to equanimity by simply following the road to the party.

Of course, keeping Maria’s portfolio is much more important than my ability to attend a party (no matter how fabulous it may be!), so I added to my story by reminding her that this momentary dip in her portfolio is likely just that: momentary. Then I showed her this chart that illustrates the percentage of positive returns of the S&P 500, from the beginning of the index through 2017: 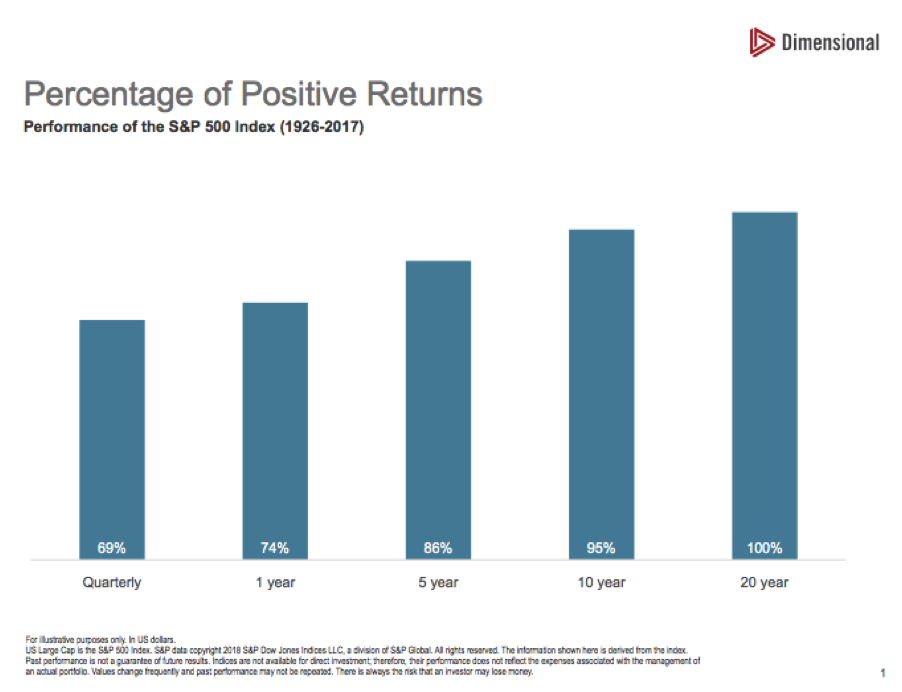 Providing this new perspective helped tremendously. Looking at the market from a distance, Maria saw today’s shifts in the market for what they are: short-term “blips.” Did that make it any less painful for her to see that her nest egg is down by double digits? Absolutely not. As Sharon Salzberg said last weekend, “Some things just hurt.” Despite the pain, Maria could feel that there was no reason to panic. I repeated the words of my friend in Malibu: “Just breathe…and don’t look.” Easier said than done, I know, but Maria is doing just that.

Late in the day on Saturday, someone asked, “Does meditation really work?” Salzberg replied that, yes, it does, “just not always the way we expect it to.” She said that it “works” as the result of a lifetime of regular, dedicated practice. I have to wonder: maybe she was talking about investing the whole time after all.